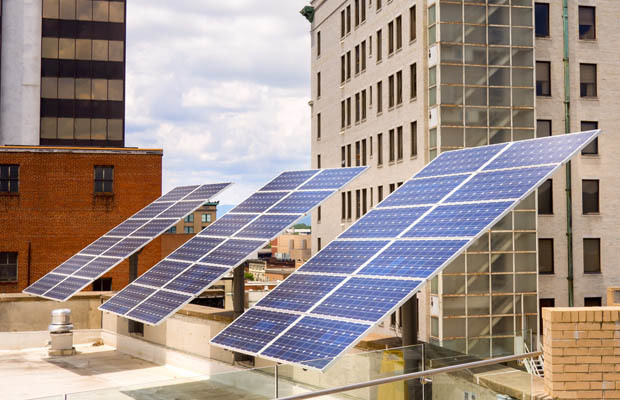 Solar energy is one of the most sustainable energy sources, converting light into electricity. Solar panels power buildings with electricity, allowing workers to carry on their day-to-day tasks with a renewable energy source. Equipping a facility with solar panels is one of the greenest actions to take within infrastructure. Not only are solar panels good for the environment—eliminating greenhouse gas emissions and declining the use of fossil fuel—they also save money on electric bills.

Solar panels do not work unvaryingly under all conditions and there are certain factors that can affect efficiency. Learn how to improve solar panel efficiency and increase your energy source with these four tips.

Problem: Shade is a major inhibitor for solar panels, as it is a form of sun blockage. Shade is not necessarily equivalent to cloudy skies, although such days yield less productive electricity secretion from the panels, they do not entirely block them off from sunlight. Panels still receive sunlight and create the conversion, just a smaller one, under hazy conditions.

Why: The reason shade bars efficiency for solar panels lies in how they are installed internally with each other. A single panel has groupings of cells wired for increasing the voltage. If even a miniscule part of the panel has shade, the whole module will have less energy conversion.

Solution: True shade, or the one most harmful for solar panels, takes the form of nearby trees and infrastructural barriers like chimneys and vents. While it’s nearly impossible to move a chimney, high-rising trees should be trimmed, if not removed altogether.

Problem: Weather conditions make up a major factor in solar panel performance. Snow and hail are pesky elements that inhibit solar panels, but not so much as to halt their operation entirely. Snow panels retain enough heat to melt off the snow lodged atop them, while hail cannot break through the solar panel glass, as most U.S. panels are equipped to withstand a hail stone 1” or smaller at 50+ mph. Surprisingly, warm temperature is a major deterrent to solar panel efficiency.

Why: Though rather odd, warm weather is not as conducive to energy conversion as one might think. A UK study found a 1.1% drop in solar panel conversion for every increase of degrees Celsius after 42 degrees, or 107 degrees Fahrenheit. The decrease in production occurs during summer weather, starting at 87-91 degrees Fahrenheit. The reason high temperatures cause this negative effect is because electricity production relies on the movement of electrons.

Solution: On hotter days, less energy is needed to excite the electrons so less energy is transferred from the sun to the solar cells. In short, cooler, sunny weather makes for the most effective solar panel efficiency.

Problem: Solar panels facing a particular way, like east or north, are considered to have poor solar panel orientation.

Why: Solar panel orientation refers to the position of the solar panels in terms of direction. It can be problematic because they are reliant on sunlight and certain positions do not grant them the optimal sunlight.

Solution: Solar panels ought to be positioned in a way that allows the most amount of sunlight possible. In the U.S., they should be facing south. They also should face west, especially during peak power demands, which, as aforementioned, are in the summer.

There have been debates contending over which direction is better, south or west. Ultimately, solar panel orientation benefits by both westward and southward positioned panels. The only differences in conversion between the two orientations were in part responsible by the time period. For example, 3-7pm has the maximum sunlight conversion when the panels face west. During the summer, west-facing panels also received greater conversion. But annually, the best position was determined to be at around 219 degrees.

Problem: Solar panels are not invincible to common congestions like dust and dirt.

Why: These clogs block the solar cells, resulting in less sunlight exposure and lesser efficiency. They build up over time and the more blockage, the less effective the solar panels will be.

Solution: When it comes to the upkeep of solar panels, there is not much maintenance needed. Solar panel preservation calls for light maintenance like regular cleaning.

Dust can be removed via soapy water and wipes, and sometimes rain alone will clear out the dust perched on the module. There is no standard for cleaning frequency and determining how often you clean your solar panels is mainly dependent on their power output. As they age, cleaning them more regularly will keep them free of dirt, grime and other obstructions.