How to Do V-Belt Maintenance for Electric Motors 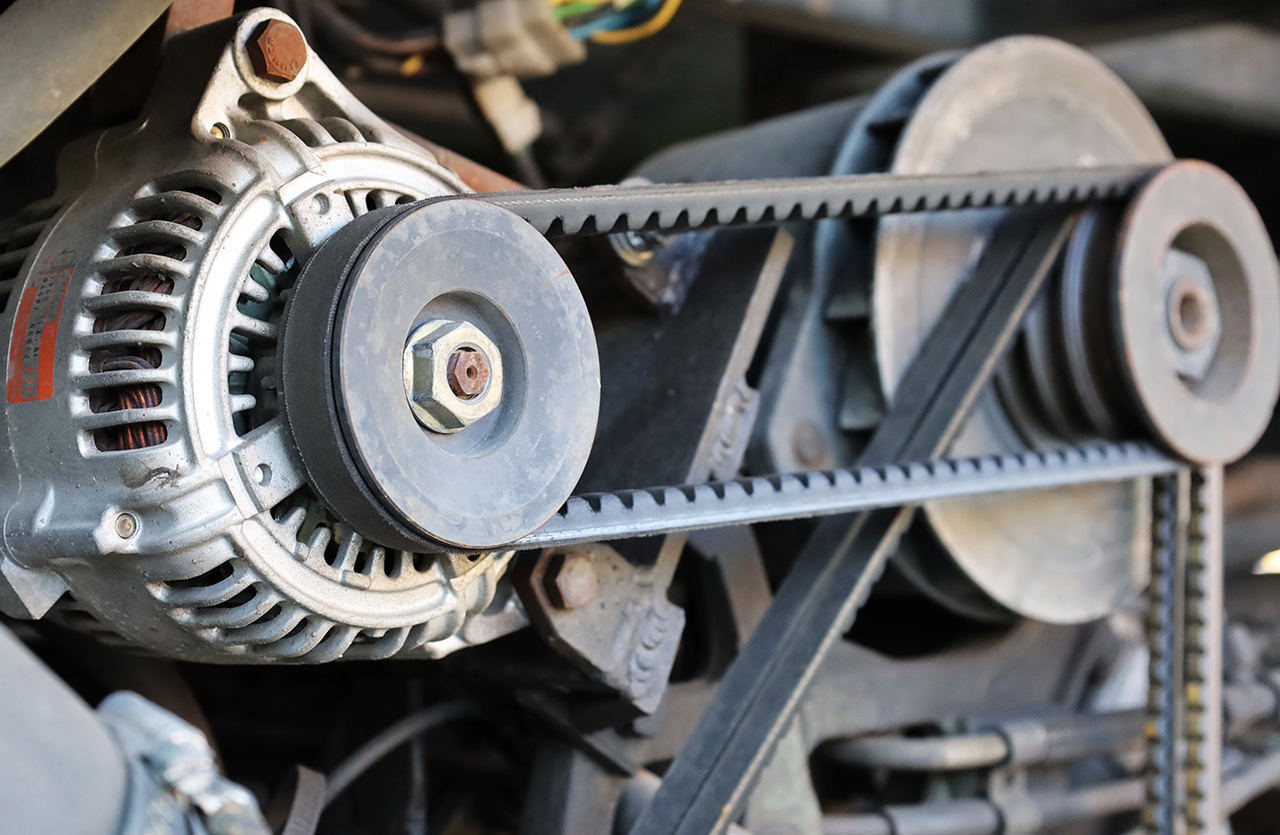 The Keys to ‘Victory’ in V-belt Maintenance

Plant managers’ to-do lists can get long pretty quickly, and making sure V-belts on electric motors are properly installed and maintained might tend to slip a few notches down the list. But that would be a mistake. Improperly maintained V-belts wear out faster and make motors work harder to produce the same power output, therefore wasting energy.

If you keep the innumerable V-belts in your plant working efficiently, it can pay big dividends—in the form of lower power usage, longer belt life and improved machine uptime.

There are more than a few belt-driven electric motors in use today: Approximately one-third of the electric motors in the industrial and commercial sectors use belt drives.1 And V-belts are powerful tools. Belt drives provide flexibility in the positioning of the motor relative to the load. Pulleys, or sheaves, of different diameters allow driven-equipment speeds to be increased or decreased relative to the motor speed. Belt power-transmission systems are relatively quiet and offer high efficiency. They require no lubrication and don’t need a lot of maintenance.2

That’s why smart maintenance managers understand how V-belts and the sheaves they run on affect the performance of their electric motors. They ask the right questions, like: are the right V-belts installed; are they at optimal tightness; or have they worn prematurely? They understand when belts need to be replaced and how to do it properly.

They also know that improper V-belt tension is the most common operating problem for belt-driven electric motors, followed by alignment, and that worn sheaves greatly reduce system efficiency while adding to maintenance costs. V-belt drives can have a peak efficiency of 95 percent or higher when installed properly, but efficiency can deteriorate by as much as 5 percent due to slippage if the belt is not periodically retensioned.2

As mentioned above, proper belt alignment and tensioning are critical to maintaining motor efficiency. Belt tension that is too loose or too tight leads to inefficient power transmission, belt wear, belt failure and possible premature motor failure. In fact, a V-belt that is over-tensioned by 10 percent can produce a 10 percent reduction in bearing life of the motor, and over-tensioning is also the leading cause of V-belt failure.3

To combat tensioning problems, maintenance professionals should have a strong arsenal of tools that they are well trained to use. These include:

Premature wear is not the only operating problem with V-belts. Outright V-belt drive failures can be caused by tension loss, tensile breaks or belt cracking:

When replacing V-belts, maintenance professionals must verify that the replacements are the correct size. The belt should ride in the groove with its top flat surface level with the outer edge of the sheave. Belts should always be installed in matched sets, and never install belts from different manufacturers on the same motor. Otherwise, the belts may have different stretch characteristics and coefficients of friction and may not have the same load-carrying ability. Overloading will cause rapid wear and reduced belt life.4

Sheave wear is also a crucial issue. Misalignment and improper belt tensioning can cause sheaves to wear prematurely, and when that happens, a formerly flat groove sidewall can take on a concave shape and the surface that interacts with the belt can be damaged. Eroded sheave sidewalls can reduce V-belt drive efficiency up to 12 percent, and operating sheaves with rough, worn sidewalls can cut V-belt life by as much as 50 percent.5

Sheave gauges are available to assess the condition of the sheave wall. There are also laser alignment tools to ensure proper alignment of parallel and angular sheaves.

Safety must be the number one concern when installing and maintaining V-belts on electric motor drives. Maintenance professionals should be aware of the potential for injuries from sharp objects, extreme temperatures, high-speed abrasions, pinch points, confined spaces, unexpected movement and blunt-force injuries from excessive force or uncontrolled release of belt tension. Other hazards include unbalanced loads, airborne objects, inadequately secured pulleys and loose bushings and screws. Maintenance professionals should maintain a well-organized and well-lit work area with little clutter. Also, they should consult with machinery OEMs and belt suppliers for advice on parts such as V-belts, sheaves and conveyors and how they should be maintained.6

There are several different types of V-belts for use on electric motors:

Standard V-belts, used in the majority of belt drives, have a trapezoidal cross section that fits tightly into a sheave to increase friction and power transfer capability. V-belt drives can have a peak power efficiency of 95 percent or more at the time of installation. The efficiency rating depends on pulley size, pulley wear, V-belt alignment, transmitted torque, and if belts are under- or over-sized for specific load requirements. If the belt is not periodically retensioned, power efficiency can deteriorate by as much as 5 percent over time due to slippage.2

Synchronous belts, which have teeth, are about 98 percent efficient and maintain that efficiency over a wide range of loads. Synchronous belts typically require less maintenance and retensioning than V-belts and notched belts and can operate in wet and oily environments. However as stated, they require the installation of matching tooth-sized drive sprockets, requiring motors running standard V-belts to be retrofitted before synchronous belts can be used.5 Synchronous belts are also called cogged, timing, positive-drive and high-torque drive belts.

There are several reasons to switch to synchronous belts. Standard V-belts typically experience a sharp drop in efficiency when operated at high torque due to increased slippage. By contrast, synchronous belts do not slip. However, synchronous belts are noisier than V-belts, less suited for use on shock-loaded applications and transfer more vibration due to their stiffness.2

In spite of these concerns, the main reason to use synchronous belts is their outstanding energy efficiency. For example, a continuously operating, 100-hp, supply-air fan operating at an average motor load of 75 percent will consume 527,000 kWh of electricity annually. If a 95 percent efficient standard V-belt is replaced with a 98 percent efficient synchronous one, annual power cost savings would be $1,290 (with electricity priced at $0.08 per kWh).2

As a result, plant managers should:

V-belts are just one part of a plant maintenance program, but they are an important part. By making sure they cover the basics of proper tensioning, belt and sheave maintenance, and by doing proper monitoring, plant managers can go a long way toward getting the most efficiency and service life out of their V-belts.