How Much Does it Cost to Clean up Your Water Supply? 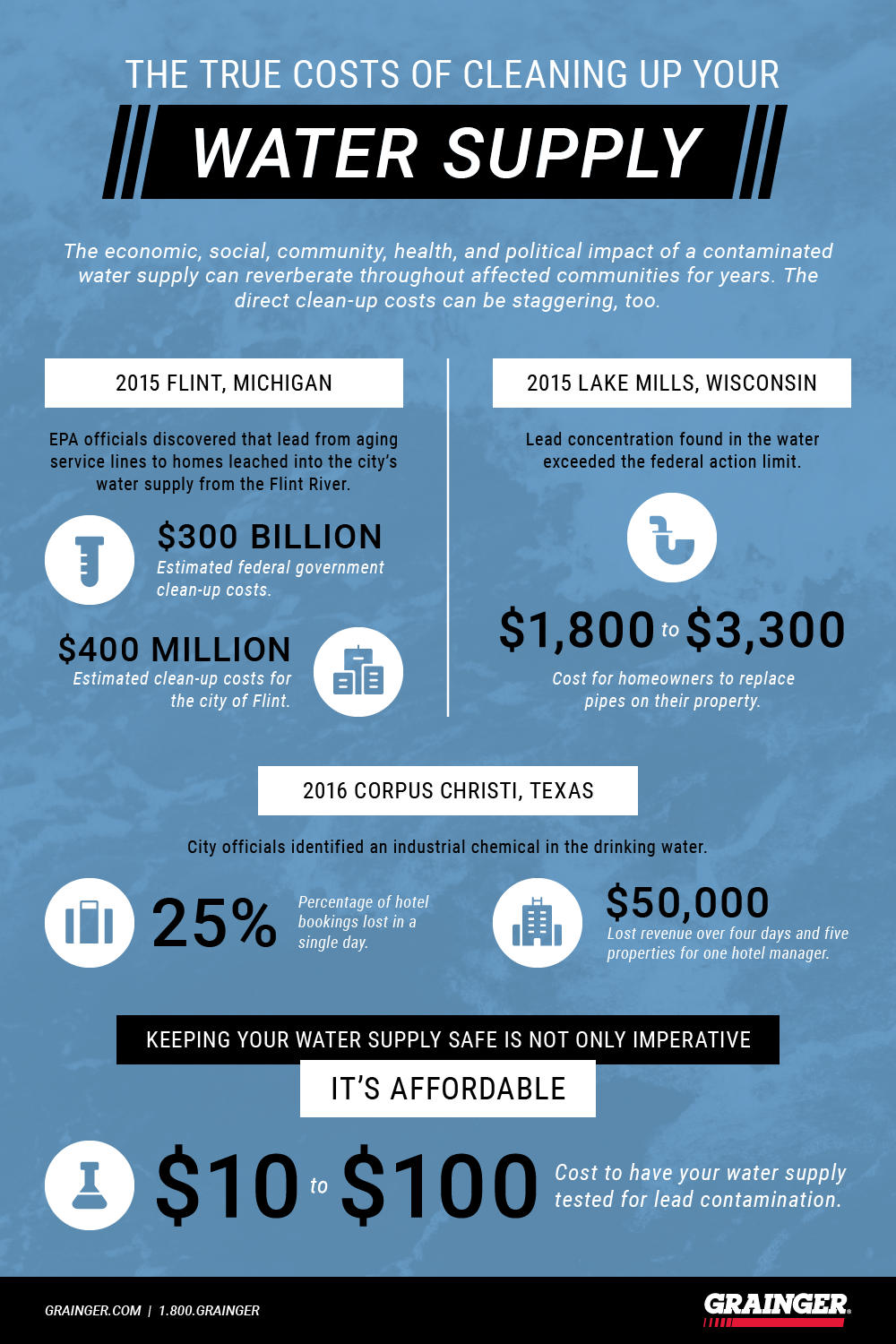 The 2015 water crisis in Flint, Michigan, was a wake-up call that went beyond state and local governments. The aging infrastructure of hotel and restaurant plumbing is linked to higher-than-average levels of lead in drinking water.

Although the water coming from the local utility company might be safe, a significant source of lead leaching occurs inside the building’s water distribution system.

What’s more, if many towns and cities across the United States fail to fix their old pipes, which can introduce lead, copper and bacteria into the public water supply, they too are increasingly prone to the same problems Flint faced. It’s estimated the federal government could end up paying $300 billion to clean up Flint’s water supply, with the city itself paying $400 million.

It’s a scenario those in the hospitality industry want to avoid at all costs and it can very much affect a facility’s bottom line.

So what exactly are the costs of cleaning up your water supply? The answer is contingent upon a number of variables, which we’ll tease out here.

Many Corpus Christi, Texas, hotels lost a quarter of their guests in a single day after a water ban there went into temporary effect in December 2016. The city had identified an industrial chemical in the drinking water and banned its use for drinking or washing.

“We had guests talking about us as if we were Flint Michigan, Jeff Wilkinson, Regional Director of Operations, US Hospitality told a local television news station at the time.

By the second day of what turned into a four-day ban, Wilkinson estimated that the five hotels he manages had lost about $50,000.

The city’s tourism industry rebounded. But individual facilities across the nation that are found to have high levels of lead in their drinking facility may not be so lucky.

To determine the amount of lead in your drinking water, have your water tested for lead. This costs between $10 and $100 in most municipalities.

Lead found in tap water usually comes from the corrosion of older fixtures or from the solder that connects pipes.

Until the late 1980s, lead solder was commonly used during installation of copper piping systems. But lead solder can elevate the levels of lead in the water that flows throw pipes by 10 to 60 times the legal limit. Also, lead can leach into water when the water sits in leaded pipes for several hours.

It is best to have your water tested for “total lead,” which includes particles rather than just “dissolved lead” which will ignore particulate lead in the water.

You should collect two water samples, including a “first-draw” or “first-flush” sample and a “running” sample. Collect the first-draw sample first thing in the morning from cold water that has sat in the plumbing system overnight. This sample determines if lead accumulates in your water as it sits in contact with the plumbing system.

Collect the running sample after allowing the cold water to run for one minute. Comparing the results helps you determine the source of a lead problem.

A lead concentration that remains above 15 parts per billion after the water has run for one to two minutes indicates that lead is probably present in the water before it enters the facility’s plumbing. The lead may originate from water supply contamination, from corroding submersible pump parts, or from corroding lines in a public water system.

If tests reveal lead in the drinking water at or exceeding the maximum contaminant level of 15 parts per billion, ask the local utility that supplies your water to test your incoming water supply.

The results will tell you whether lead is brought in through the utility’s water supply or is within building’s water distribution system.

If testing shows the lead in your facility’s water is high, you may be thinking about supplementing bottled water to replace tainted tap water for the short term. But going that route is expensive and risky. Minnesota researchers have tallied up the costs of nitrate pollution on consumers in that state. A 2008 study from the researchers found that the cost to buy bottled water to replace tainted tap water cost residents about $190 per person each year.

Need Some More Help With Your Water-quality Efforts?

If your facility receives water from a well, know that the average cost of a new deep-aquifer well was $7,200 plus water softener in Wisconsin in 2015, the Wisconsin Center for Investigative Journalism found. And water treatment systems like reverse osmosis, distillation or anionic exchange systems cost an average of $800 to install plus $100 a year for maintenance, the center found.

If it’s your facilities pipes, faucets, and other plumbing components that are the culprit, you’ll need to replace them. Again, costs are all over the board here.

But a 2015 estimate in Lake Mills, Wis., which also faced a lead-in-the-water crisis, noted that it would cost homeowners from $1,800 to $3,300 to replace pipes on their property. And that was for a home, not a large, recreational facility with multiple water users and bathrooms.

Your insurance may be able to help with pipe replacement, but don’t count on it, according to Larry Gillanders, co-founder of Ace DuraFlo Systems, which makes pipe-lining system.

In response to the lead paint crisis, many organizations in the insurance industry responded with “lead liability exclusions,” Gillanders says. Some of these exclusions, such as absolute lead exclusions, were written broadly to apply not only to claims involving exposure to or ingestion of lead paint, but also to liabilities arising out of plumbing solder, pipes and fixtures.

So check with your insurance provider in regards to lead exclusions at your property.

As we’ve seen, the cost of cleaning up your water supply can be high if pipe replacement is necessary. But those costs pale in comparison to the loss of business and negative publicity your facility could see. So schedule a water test today.