For Chris Case, there is no need to ask the question “Why we are doing this?” He asks: “Why aren’t we doing more?” The Facility Manager at Pictured Rocks National Lakeshore in Munising, Michigan believes those questions apply to virtually every activity in the park itself as well as when he is making his pitch for biobased products’ use to outside groups.

For the record, Case has been an earlier adopter of biobased products, which are used in the following park equipment: 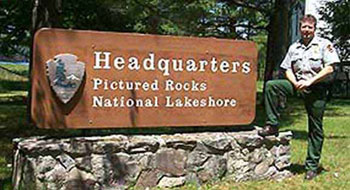 Facility Manager, Chris Case is impressed by the positive impact biobased products have made at Pictured Rocks.
Featured Products

Use of environmentally friendly products in Pictured Rocks goes back 15 years according to Case. He says it got “kicked up a notch or more” in 1999 with the signing of the joint agreement between the U.S. Department of Energy and Department of the Interior establishing the Green Energy Parks Program. “Unlike many others who started with biodiesel, we first used soy-based hydraulic fluids, then went to biodiesel and then quickly found numerous other products that worked,” he says.

“For example, Bill Magli our auto mechanic said he’d heard about the use of ‘vegetable oils’ as substitutes for the petroleum content in hydraulic fluids made for vehicle lifts. We tried and have been happy with its use ever since,” he explains.

“And while we’re on the subject of Bill Magli, I have to tell you a personal story about him. Like most mechanics, Bill had continual problems with rough, chaffed hands to the point of cracks and sores. Using biobased cleaning solvents and soy-based hand cleaners, his hands have never been in better shape,” Case reports.

“Once we got started, we looked for as many products as possible and realized that the program to use environmentally friendly biobased products went very well with our continuing safety program, which was aimed both at park workers and park visitors,” he notes.

Again, Case cites the example of a park worker: “Brad Bradley operates diesel equipment and unfortunately got headaches by the end of the day as a result of his sensitivity to diesel fumes. But with biodiesel his headaches are gone, and he goes home feeling well.”

The question, “Why aren’t we doing more?” is what motivated Chris Case to become a campaigner for biobased products. “Once we knew how well they worked and could see for ourselves their positive impact, I felt it was our obligation to let others in the community and in the Park Service know about our experiences,” he states.

His presentation debut was at a Midwest regional Park Service facilities managers’ meeting in Duluth, Minnesota in late 2002. “Our aim was to discuss the products in terms of their environmental benefits as well as their equal or better performance. We have samples there for people to see and use,” he explains.

Since then he has made his presentation to individual Park Service sites such as the Jefferson National Expansion Monument in St. Louis and at other National Park Service meetings. Maybe more importantly, Case also takes his case to audiences/users outside of the Park Service.

For example, in the spring on 2003, in his hometown of Munising, Case and one of his suppliers of biobased products, Renewable Lubricants, held a half-day workshop for more than 20 people. Attendees came from local and state government, technical schools, state and national parks, the Michigan Correctional System and even a local logging company. As usual, Case explained the concept and described Pictured Rocks’ use of the products. Keith Rienholt of the Michigan Soybean Promotion Committee discussed new product development and biobased industry trends, and William Garmier, president of Renewable Lubricants discussed product availability, applications, interchangeability and quality control.

A number of these attendees are now using one or more biobased products. Case cites one particularly interesting use. “One of the correctional facility representatives had asked how the parts cleaning product works. It seems the locks throughout the facility, particularly those on cell doors, needed cleaning, and it was a problem. Their current cleaners were harsh and abrasive and because of their fumes inmates were required to move out of their cells—a cumbersome and difficult thing to do in a crowded prison.

“We loaned him a gallon of parts cleaner, and later he reported it worked wonderfully. The locks could be cleaned with inmates in the cells without any adverse affect on them or the people doing the cleaning. They tell me: Problem solved. We use it all of the time,” relates Case.

In the fall of 2003, Case spread the biobased word to several audiences at Northland College, home of the Sigurd Olson Environmental Institute in Ashland, Wisconsin. This was personally rewarding not only as an alumni sharing the real world application of concepts learned there many years ago, but also in being able to contribute to the College's and Institute's championing the education in, and application of, environmental responsibility.

Case summarizes his commitment to environmental responsibility and the use of biobased products in this way: "The National Park Service takes care of some of the most unique resources in the world. The public expects, and rightfully so, that the National Park Service be environmental leaders in our day to day operations as we protect those resources. At Pictured Rocks National Lakeshore and other park areas, the use of biobased products is certainly a significant element in helping us meet that expectation."