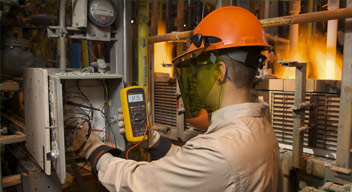 As distribution systems and loads become more complex, the possibilities of transient overvoltages increase. Motors, capacitors and power conversion equipment, such as variable speed drives, can be prime generators of spikes. Lightning strikes on outdoor transmission lines also cause extremely hazardous high-energy transients. If you’re taking measurements on electrical systems, these transients are “invisible” and largely unavoidable hazards. They occur regularly on low-voltage power circuits, and can reach peak values in the many thousands of volts. In these cases, you’re dependent for protection on the safety margin already built into your meter. The voltage rating alone will not tell you how well that meter was designed to survive high transient impulses.

Early clues about the safety hazard posed by spikes came from applications involving measurements on the supply bus of electric commuter railroads. The nominal bus voltage was only 600 V, but multimeters rated at 1000 V lasted only a few minutes when taking measurements while the train was operating. A close look revealed that the train stopping and starting generated 10,000 V spikes. These transients had no mercy on early multimeter input circuits. The lessons learned through this investigation led to significant improvements in multimeter input protection circuits.

Meters have been used for years by technicians and electricians, yet the fact is that meters designed to the IEC 1010 standard offer a significantly higher level of safety. Let's see how this is accomplished.

Transient Protection The real issue for multimeter circuit protection is not just the maximum steady state voltage range, but a combination of both steady state and transient overvoltage withstand capability. Transient protection is vital. When transients ride on high-energy circuits, they tend to be more dangerous because these circuits can deliver large currents. If a transient causes an arc-over, the high current can sustain the arc, producing a plasma breakdown or explosion, which occurs when the surrounding air becomes ionized and conductive. The result is an arc blast, a disastrous event which causes more electrical injuries every year than the better known hazard of electric shock.

Measurement Categories The most important single concept to understand about the standard is the Overvoltage Installation Category. The standard defines Categories I through IV, often abbreviated as CAT I, CAT II, CAT III and CAT IV. The division of a power distribution system into categories is based on the fact that a dangerous high-energy transient such as a lightning strike will be attenuated or dampened as it travels through the impedance (ac resistance) of the system. A higher CAT number refers to an electrical environment with higher power available and higher energy transients. Thus, a multimeter designed to a CAT III standard is resistant to much higher energy transients than one designed to CAT II standards.

It’s Not Just the Voltage Level A technician working on office equipment in a CAT I location could actually encounter dc voltages much higher than the power line ac voltages measured by a motor electrician in a CAT III location. Yet transients in CAT I electronic circuitry, whatever the voltage, are clearly a lesser threat, because the energy available to an arc is quite limited. This does not mean there is no electrical hazard present in CAT I or CAT II equipment. The primary hazard is electric shock, not transients and arc blast. Shocks can be every bit as lethal as arc blast.

To cite another example, an overhead line run from a house to a detached work shed might be only 120 V or 240 V, but it’s still technically CAT IV. Why? Any outdoor conductor is subject to very high-energy lightning-related transients. Even conductors buried underground are CAT IV, because although they will not be directly struck by lightning, a lightning strike nearby can induce a transient because of the presence of high electromagnetic fields. When it comes to Overvoltage Installation Categories, the rules of real estate apply: it’s location, location, location....

Let’s take a look at a worst-case scenario in which a technician is performing measurements on a live three-phase motor control circuit, using a meter without the necessary safety precautions.

Here’s What Could Happen:
1. A lightning strike causes a transient on the power line, which in turn strikes an arc between the input terminals inside the meter. The circuits and components to prevent this event have just failed or were missing. Perhaps it was not a CAT III rated meter. The result is a direct short between the two measurement terminals through the meter and the test leads.
2. A high-fault current–possibly several thousands of amps– flows in the short circuit just created. This happens in thousandths of a second. When the arc forms inside the meter, a very high-pressure shock wave can cause a loud bang–very much like a gunshot or the backfire from a car. At the same instant, the tech sees bright blue arc flashes at the test lead tips– the fault currents superheat the probe tips, which start to burn away, drawing an arc from the contact point to the probe.
3. The natural reaction is to pull back, in order to break contact with the hot circuit. But as the tech’s hands are pulled back, an arc is drawn from the motor terminal to each probe. If these two arcs join to form a single arc, there is now another direct phase-to-phase short, this time directly between the motor terminals.
4. This arc can have a temperature approaching 6000 °C (10000 °F), which is higher than the temperature of an oxyacetylene cutting torch! As the arc grows, fed by available short circuit current, it superheats the surrounding air. Both a shock blast and a plasma fireball are created. If the technician is lucky, the shock blast blows him away and removes him from the proximity of the arc; though injured, his life is saved. In the worst case, the victim is subjected to fatal burn injuries from the fierce heat of the arc or plasma blast. In addition to using a multimeter rated for the appropriate measurement category, anyone working on live power circuits should be protected with flame resistant clothing, should wear safety glasses or, better yet, a safety face shield, and should use insulated gloves. Transients aren’t the only source of possible short circuits and arc blast hazard. One of the most common misuses of handheld multimeters can cause a similar chain of events.

If the test leads are left in the amps terminals and then accidentally connected across a voltage source, the low input impedance becomes a short circuit! It doesn’t matter if the selector dial is turned to volts; the leads are still physically connected to a low-impedance circuit.* That’s why the amp terminals must be protected by fuses. Those fuses are the only thing standing between an inconvenience–blown fuses–and a potential disaster.

Use only a multimeter with amps inputs protected by high-energy fuses. Never replace a blown fuse with the wrong fuse. Use only the high-energy fuses specified by the manufacturer. These fuses are rated at a voltage and with a short circuit interrupting capacity designed for your safety.

Fuses protect against overcurrent. The high input impedance of the volts/ohms terminals ensures that an overcurrent condition is unlikely, so fuses aren’t necessary. Overvoltage protection, on the other hand, is required. It is provided by a protection circuit that clamps high voltages to an acceptable level. In addition, a thermal protection circuit detects an overvoltage condition, protects the meter until the condition is removed, and then automatically returns to normal operation. The most common benefit is to protect the multimeter from overloads when it is in ohms mode. In this way, overload protection with automatic recovery is provided for all measurement functions as long as the leads are in the voltage input terminals. V189 R E RMS M T METER

Shortcuts to Understanding Categories
Here are some quick ways to apply the concept of categories to your everyday work:

As you can see, the concept of categories is not new and exotic. It is simply an extension of the same common-sense concepts that people who work with electricity professionally apply every day.

Multiple Categories
There’s one scenario that sometimes confuses people trying to apply categories to real-world applications. In a single piece of equipment, there is often more than one category. For example, in office equipment, from the 120 V/240 V side of the power supply back to the receptacle is CAT II. The electronic circuitry, on the other hand, is CAT I. In building control systems, such as lighting control panels, or industrial control equipment such as programmable controllers, it is common to find electronic circuits (CAT I) and power circuits (CAT III) existing in close proximity.

What do you do in these situations? As in all real-world situations, use common sense. In this case, that means using the meter with the higher category rating. In fact, it’s not realistic to expect people to go through the category defining process all the time. What is realistic, and highly recommended, is to select a multimeter rated to the highest category in which it could possibly be used. In other words, err on the side of safety.

The CAT III-600 V meter clearly offers superior transient protection compared to the CAT II-1000 V meter, even though its so-called “voltage rating” could be perceived as being lower. It is the combination of the steady-state voltage (called the working voltage), and the category that determines the total voltage withstand rating of the test instrument, including the all-important transient voltage withstand rating.
A note on CAT IV: Test values and design standards for CAT IV voltage testing are addressed in IEC 61010 second edition.

Creepage and Clearance
In addition to being tested to an actual overvoltage transient value, multimeters are required by IEC 61010 to have minimum “creepage” and “clearance” distances between internal components and circuit nodes. Creepage measures distance across a surface. Clearance measures distances through the air. The higher the category and working voltage level, the greater the internal spacing requirements. One of the main differences between the old IEC 348 and IEC 61010 is the increased spacing requirements in the latter.

The Bottom Line
If you are faced with the task of replacing your multimeter, do one simple task before you start shopping: Analyze the worst-case scenario of your job and determine what category your use or application fits into. First choose a meter rated for the highest category you could be working in. Then, look for a multimeter with a voltage rating for that category matching your needs. While you’re at it, don’t forget the test leads. IEC 61010 applies to test leads too: They should be certified to a category and voltage as high or higher than the meter. When it comes to your personal protection, don’t let test leads be the weak link.

*Some multimeters have an input alert which gives a warning beep if the meter is in this configuration.