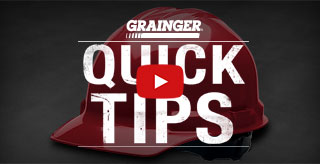 The Occupational Safety and Health Administration (OSHA) guidelines for head protection are referenced in 29 Code of Federal Regulations (CFR) 1910.135 and 1926.100.

29 CFR 1910.135(a)(1) states, "Each affected employee shall wear protective helmets when working in areas where there is a potential for injury to the head from falling objects." The standard also covers conditions where electrical hazards are present. 1910.135(a)(2) states, "Protective helmets designed to reduce electrical shock hazard shall be worn by each such affected employee when near exposed electrical conductors which could contact the head." "Affected Employees" are defined by OSHA as "those employees who are exposed to the hazard(s) identified as violation(s) in a citation." This definition has been added to clarify that the term, as used in this regulation, applies specifically to those employees who are put at risk by the safety or health hazard cited by the OSHA Compliance Officer.

Although the OSHA standards themselves do not identify specific occupations or applications where a hard hat is required, appendix B to subpart I part 9 lists some examples. It states "Some examples of occupations for which head protection should be routinely considered are: carpenters, electricians, lineman, mechanics and repairers, plumbers and pipe fitters, assemblers, packers, wrappers, sawyers, welders, laborers, freight handlers, timber cutting and logging, stock handlers, and warehouse laborers." The appendix also provides examples of general applications where hard hats should be worn.

Which Consensus Standards are applicable to Hard Hat Regulations?

On September 9, 2009, OSHA issued an update to its personal protective equipment (PPE) standards. The final rule went into effect in October that year and revised the PPE sections of OSHA’s general industry, shipyard employment, longshoring, and marine terminals standards regarding requirements for eye- and face-protective devices, head protection and foot protection.

In the future, OSHA plans on updating the national consensus standards referenced in the PPE standards as new editions become available.

ANSI published a revision to the Z89.1-1997 standard in 2003. The most significant changes from the 1997 version were made to harmonize with other national standards that test and evaluate equipment performance. In addition, many physical hard hat requirements that did not provide added user value, or that limited design or performance, were removed.

ANSI published a revision in January of 2009. The significant changes from the 2003 version included three non-mandatory tests:

Lower temperature: Hard hats marked with an "LT" indicate that the hard hat meets all testing requirements of the standard when preconditioned at a temperature of -30°C (-22°F).

High visibility: Hard hats marked with an "HV" indicate that the hard hat meets all testing requirements of the standard for high visibility colors. This includes tests for chromaticity and luminescence.

According to the ANSI/ISEA standard, hard hats must also contain user information such as instructions pertaining to sizing, care and service life guidelines. Every hard hat conforming to the requirements of ANSI Z89.1-2014 must be appropriately marked to verify its compliance. The following information must be marked inside the hard hat:

If optional performance features are applicable, the appropriate marking(s) below must be applied in the sequence as shown:

One common misconception is that hard hats have a predetermined service life - that is not the case. All hard hat components and accessories should be inspected daily for signs of dents, cracks, penetration and any damage due to impact, rough treatment or wear that might reduce the degree of protection originally provided.

In addition to everyday wear and tear, ultraviolet (UV) radiation can pose a problem for hard hats constructed of plastic materials. Damage caused by UV radiation is easy to spot: the hat will lose its glossy finish and eventually take on a chalky appearance. Further degradation could cause the shell to actually start flaking away. A helmet with worn, damaged or defective parts should be removed from service.

Useful service life guidelines supplied by the helmet manufacturers are intended to provide the user with information that certain conditions may affect a specific helmet’s continued protection over time. Specific service life, defined in terms of number of years, is not required though individual manufacturers may choose to include such information for their helmets.

Find even more information you can use to help make informed decisions about the regulatory issues you face in your workplace every day. View all Quick Tips Technical Resources at www.grainger.com/quicktips.

Please Note:
The information contained in this publication is intended for general information purposes only and is based on information available as of the initial date of publication. No representation is made that the information or references are complete or remain current. This publication is not a substitute for review of the current applicable government regulations and standards specific to your location and business activity, and should not be construed as legal advice or opinion. Readers with specific questions should refer to the applicable standards or consult with an attorney.