Caster Sub-Type
Caster Sub-Type
This indicates whether the caster is a rigid caster or a swivel caster.
Rigid
Rigid casters do not swivel, which allows them to maintain a straight course when the caster is rolling.
Swivel
Swivel casters can rotate up to 360°, which allows them to change direction and maneuver around curves and obstacles while rolling. 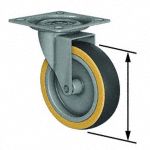 Wheel Diameter
This is the distance from one edge of the wheel's face to the opposite edge of the face across the widest part of the wheel.
Wheels with larger diameters require less force to start them rolling and to roll them over obstacles such as uneven surfaces, thresholds, debris, and soft surfaces.
Wheels with smaller diameters require more force to start them rolling, which keeps items they're installed on from rolling too freely. They also lower the items' center of gravity, which improves stability and prevents tipping.